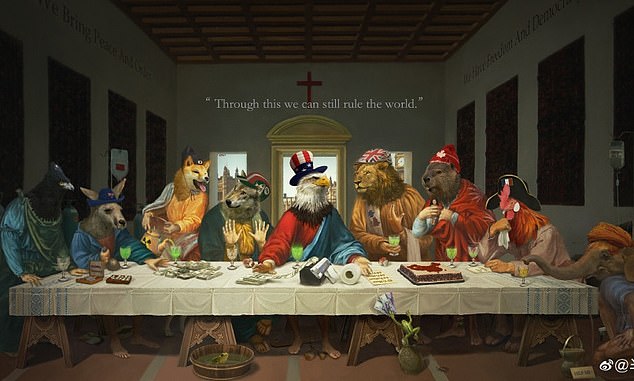 Amy continues the story of the medicine woman who’s medicine stopped the mothers bleeding after a difficult childbirth. Amy was curious to learn more from the woman, and curious why she lives far from the village as a punishment. Amy was visiting her often to learn how to treat various conditions, including malaria and leprosy. She visited with a few “barefoot doctor” friends, hoping she would join their team, but the CCP had labeled her as a “class enemy”. The villagers loved her, because she saved peoples lives.

Amy asked her why she spoke Mandarin and she explained that she was from a different province. She explained that her father was a herbal doctor and their family owned quite a bit of land. Because her father had saved many lives, he was given a warning by a local CCP official that upcoming land reform would take their land away and they would be executed. So they evacuated to Yunnan province, hoping to eventually leave China. A local land lord had given them some land to farm when they arrived.

After not too long, land reform came to Yunnan as well. The family explained to the CCP that they had recently arrived to Yunnan. But when the Cultural Revolution arrived, the Red Guard the family was interrogated and forced to denounce each other. The family was facing execution. The father and mother chose suicide by poison. The daughter was allowed to live.

At some later point, a Liberation Army officer was sick with malaria. The medicine woman treated him, but it was too late. The officer died. The soldiers decided to send her to a leper village as punishment where she was put in a cage to die. However, the lepers let her out in exchange for medicine, which she provided. They then helped her survive and make a home on the hillside.

Nan asks Professor Victor Davis Hansen what he thinks about the possibility of the US canceling our debt to China. Professor Hansen does not believe that China feels any remorse for the spread of COVID, and probably would not be willing to pay for it, even if they did. He would rather address the question of how aware China or the US is of the way the virus appeared and was spread. He suggests that there are clear reasons why a connection between the WIV laboratory and the spread of the disease. Professor Hansen mentions how clever the CCP was to accuse Trump of racism for suggesting a lab connection. He also mentions Dr. Fauci’s complicity in the funding of the research.

Amy suggests we have overwhelming evidence of a lab leak and asks whether the Biden administration would do anything about it. Professor Hansen suggests that the Biden admin was heavily invested in the “narratives” which denied the possibility of a lab leak, but now that so much evidence has come out the admin is “embarrassed”.

Amy asks about China’s concerns at not being invited to the G7 meeting and asks if the G7 meeting will really do something to contain China. Professor Hansen points out that China is a much greater threat than Russia, suggesting that China has far greater resources and has taken full advantage of the Left in the US. Professor Hansen describes the control China has over Wallstreet and US entertainment.

Nan describes China’s “Anti-foreign Sanctions Law”, describing how all of Chinese society is supposed to act to resist foreign, human rights based, sanctions. Professor Victor Davis Hansen suggests that the risk vs the benefit of

“Basically telling people like Bill Gates or Michael Bloomberg” that the CCP now “overtly demands fealty from you”. He suggests that China wants everyone to know who has been bought, with the confidence that they will control the global system soon anyway.

Billy asks if there is anything we can do about China’s rise to power and Mob like behavior. The Professor suggests that their Universities and Military are merit based, while ours no longer are. He suggests that China is a little premature, but that they are on a path to greater power.

The Professor cites a variety of Chinese influence and acceptance of CCP propaganda in US Universities. He describes how the NBA is teaching the Chinese how to run a successful basketball league, with the intention of adapting it for their own purposes.

Nan asks what the relevance is regarding the large number of Chinese students attending US Universities. The Professor describes how advanced CCP propaganda is, citing a variety of examples. The Professor describes how University Academics would present Woke ideology in order to fit in to the system. He suggests we should constantly contrast Taiwan and Mainland China, citing Taiwan’s democracy and international norms.

Nan describes the Chinese cartoon depicting the “Last Supper” in the vein of the G7 nations meeting and explained the CCP’s Anti-foreign Sanctions legislation. Michael Olsen comments about the naivete of US businesses operating in China, asking “How easy would it be for Xi to take over Apple?”

Michael mentions that Professor Hansen teaches the classics and wants to ask him if he sees anything in history that corresponds to our present predicament.

Micheal wants to know from the audience whether the US should ally with Russia or China?

Nan mentions that Putin was early to his meeting with Biden, though he is notorious for being late to meetings.

Nancy asks how many US businesses are Chinese owned.

Leroy suggests that for thousands of years, emperors used fear to control people suggesting that the virus has caused a lot of fear.

Dick is surprised Professor Hansen was vague about canceling the US debt to China. He’d like to see more “made in America” products.

Lane doesn’t understand why there are so many wealthy Chinese coming to the US. Nan says that 9% of the total of UC California students are from Mainland China. He describes how 10 UC Universities are allied with 10 Chinese Universities, while the Chinese government provides grants to students to attend University in the US.

Cornell Terry mentions that there are lawsuits in US courts regarding the intentional release of COVID by the Chinese.

David considers the Chinese purchase of US pork producer Smithfield Foods a strategic liability. He also mentions the US’s gain of function research dating back to 2014.

Jim recalls a 9/11 headline saying the “US Is Eating The Bread We’ve Been Baking For 20 Years”, suggesting that the same situation exists with China.

Nan suggests the CCP has been doing everything to destroy traditional Chinese culture.

Richard is talking about Miles Gou.