With Xi’s Dramatic “Common Prosperity” Raising The Specter Of A Second Cultural Revolution, Is It Finally Time For Wall Street To Stop Betting On Chinese Business? 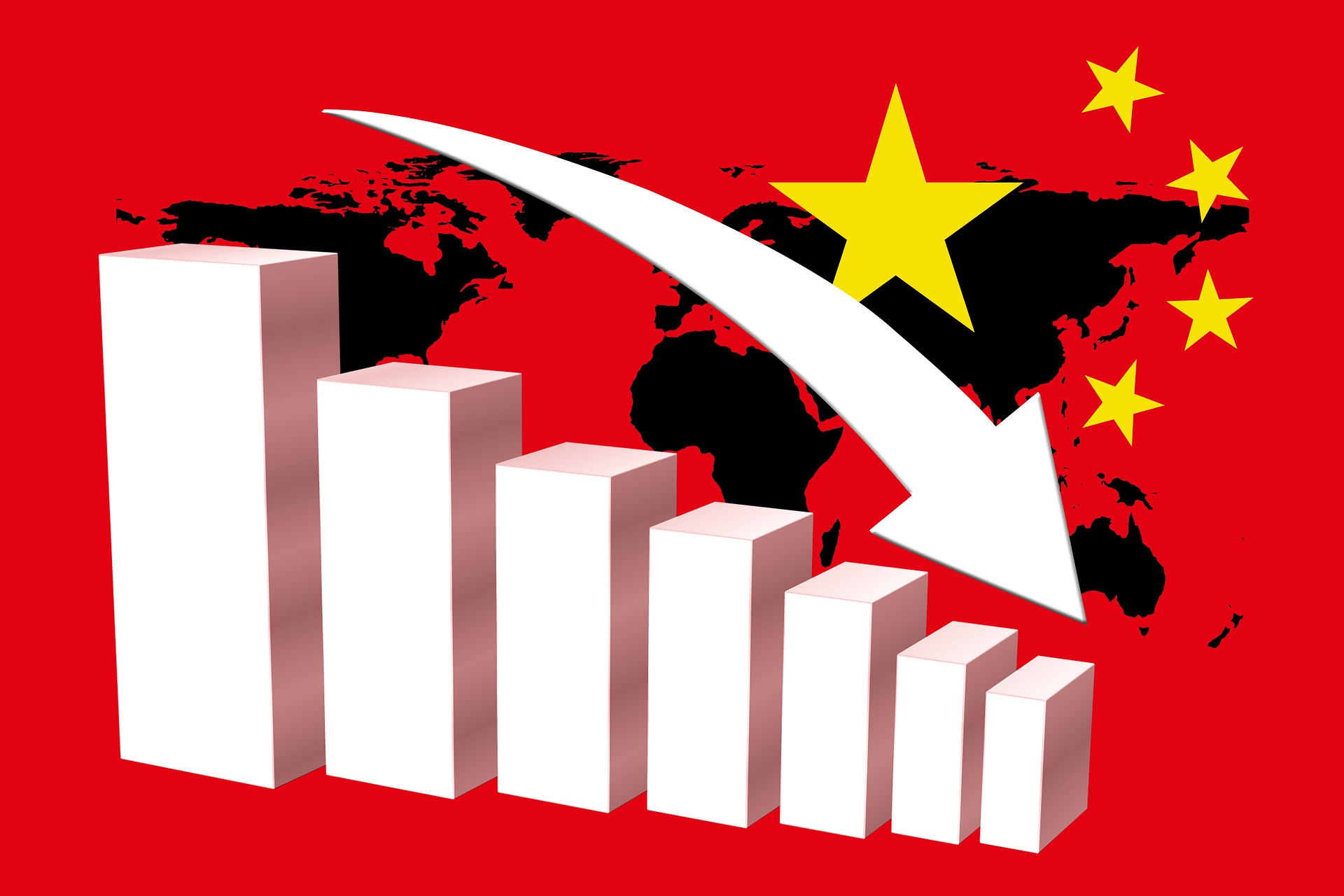 With Xi Jinping’s Institution of “Common Prosperity” programs limiting corporate independence from the CCP, placing wage caps on certain occupations, eliminating profit from others, and showing increased hostility to any hint of foreign ownership, even the rather controversial billionaire George Soros is following the lead of such luminaries as Kyle Bass and Gordon Chang in calling on Wall Street to dis-invest in Communist China. With Chinese state run media widely disseminating blogger Li Guangman’s proclamations “the capital market will no longer become a paradise for capitalists to get rich overnight” and “all those who block this people-centered change will be discarded.”, when will Wall Street get the hint?

Why ‘Common Prosperity’ Has China’s Billionaires Running for Cover
“The shakeup centers on the phrase “common prosperity.” It was first introduced by revolutionary leader Mao Zedong but has now been taken up as the defining mantra of a new era as imagined by current strongman President Xi Jinping.”
https://time.com/6095560/china-common-prosperity/

Xi Jinping is aiming to redraw China’s social contract
“The aim appears to be to advance several objectives at once, some of which overlap, and some of which do not. In advocating “common prosperity”, Beijing is signalling a campaign against social inequality. In stressing “dual circulation”, it is seeking to reduce reliance on foreign markets. In promoting family values it is, in part, hoping that women will opt to have more babies. By cracking down on after-school tuition and video games, it wants to alleviate the financial and emotional stress on families.”
https://www.ft.com/content/9fdd1308-0963-4ad1-a928-ba8d55586e78

Soros Slams BlackRock For Investing In China, Exposing Wall Street’s ESG Hypocrisy
“To say that George Soros has a mixed reputation in the US would be an understatement: while democrats and progressive love the liberal billionaire and Hillary Clinton supporter, whose one goal in life is to get the maximum number of immigrant possible inside any one given nation to help achieve a glorious “open society” where national identity and culture no longer exist and are replaced by whatever is the woke ideal du jour, republicans view the 91-year-old as Satan incarnate, and the person responsible for the record “mail-in voter turnout” (and associated pandemic) that gave us Joe “look, Afghanistan” Biden. But while it is Soros’ political and ideological leanings that have made him such a controversial figure in the US, it is the Hungarian’s financial views that have made him hated by most China, and he appears hell bent on ensuring that the sentiment is uniform.”
https://www.zerohedge.com/markets/soros-slams-blackrock-investing-china-exposing-wall-streets-esg-hypocrisy

World’s Dirtiest Cities List Raises Issue: Why Don’t Politicians Call Out China?
“Ponder this: A new tally of global cities’ emissions finds that the top 25 are responsible for 52% of the planet’s urban greenhouse gas emissions. Twenty-three of those are in China.”
https://www.realclearenergy.org/articles/2021/09/02/worlds_dirtiest_cities_list_raises_issue_why_dont_politicians_call_out_china_792851.html

New Details Emerge About Coronavirus Research at Chinese Lab
“Newly released documents provide details of U.S.-funded research on several types of coronaviruses at the Wuhan Institute of Virology in China. The Intercept has obtained more than 900 pages of documents detailing the work of EcoHealth Alliance, a U.S.-based health organization that used federal money to fund bat coronavirus research at the Chinese laboratory. The trove of documents includes two previously unpublished grant proposals that were funded by the National Institute of Allergy and Infectious Diseases, as well as project updates relating to EcoHealth Alliance’s research, which has been scrutinized amid increased interest in the origins of the pandemic.”
https://theintercept.com/2021/09/06/new-details-emerge-about-coronavirus-research-at-chinese-lab/

Pro-China social media campaign hits new countries, blames U.S. for COVID
“False information about COVID-19 has been a major focus. For example, accounts on social networking sites vKontakte, LiveJournal and elsewhere in Russian, German, Spanish and other languages have asserted that the novel coronavirus emerged in the United States before China and that it was developed by the U.S. military.”
https://www.reuters.com/world/pro-china-social-media-campaign-expands-new-countries-blames-us-covid-2021-09-08/

Research finds Chinese influence group trying to mobilize US COVID-19 protests
“Posts discovered by Mandiant researchers linked to the influence operations include those in multiple languages attempting to cast doubt on the origins of the COVID-19 virus, with several posts in multiple languages claiming it originated in the United States instead of China. Other posts prompted Asian Americans to protest U.S. racial injustice. “
https://www.newsbreak.com/news/2364892767808/research-finds-chinese-influence-group-trying-to-mobilize-us-covid-19-protests

China’s ‘political pressure’ on Australian economy isn’t working, treasurer says
“Australian Treasurer Josh Frydenberg on Monday claimed the Chinese government has failed to seriously impact the country’s economy through a series of punitive measures on exports. The trade dispute has escalated since April 2020, when Prime Minister Scott Morrison called for an international inquiry into the origins of Covid-19.”
https://www.cnn.com/2021/09/06/economy/australia-china-economy-trade-intl-hnk/index.html

China is Coming for American Farms
“The problem is a looming one. In less than a decade, China’s stake in American farmland has grown exponentially. Records from the Agricultural Foreign Investment Disclosure Act show that Chinese acquisitions “rose from less than 10 annually” before 2008 to “12 to 25 each year during 2008-13.” In 2007, China bought six farms, all in California. The next year, they had bought 30 outside California, in Arizona, Texas and Missouri.”
https://www.newsweek.com/china-coming-american-farms-opinion-1619777

Fish and ships: Chinese fishing and Europe’s Indo-Pacific strategy
“The fisheries sector has gradually become a central geopolitical issue in the Indo-Pacific. Out of the 84.4m tonnes of fish caught in seas across the world in 2018, around 61.4m tonnes came from the Indian and Pacific oceans. Although the intensity of fishing varies across regions, the depletion of fishery resources is a growing problem everywhere. China, which catches more fish than any other nation, vastly contributes to this problem with not only its fleet size and the tonnage of its catches, but also its fishing practices – which include illegal, unreported, and unregulated (IUU) fishing – and, above all, a fisheries policy that exports its environmental problems and thereby protects its own national marine areas. Moreover, China instrumentalises fishing to serve its revisionist agenda and its strategic interests more broadly, signalling its willingness to use traditional economic activities for geopolitical gain.”
https://ecfr-eu.cdn.ampproject.org/c/s/ecfr.eu/publication/fish-and-ships-chinese-fishing-and-europes-indo-pacific-strategy/

Why Chinese Amino Acids are a Threat to America’s Food Supply
“The issue is that the cessation of domestic production of amino acids would be potentially problematic for U.S. farmers, especially if the remaining suppliers were all located in China: Given its critical importance to farmers and the U.S. agricultural economy, leaving U.S. farmers wholly dependent on supply from a country with a government that manipulates markets for geostrategic reasons would be highly problematic.”
https://www.realclearpolicy.com/articles/2021/09/06/why_chinese_amino_acids_are_a_threat_to_americas_food_supply_793119.html

Stakeholder Capitalism Is a Trojan Horse for China
“According to The Wall Street Journal, Joyce quit because he was concerned that Airbnb was secretly sharing data on millions of guests and hosts — who, presumably, are among Airbnb’s most important “stakeholders” — with Chinese officials. This data included phone numbers, email addresses and the content of messages between users and the company. After authorities in Beijing asked Airbnb for even more “real-time data” — which, Joyce feared, would enhance the regime’s surveillance of minority ethnic groups — Joyce took his concerns to Airbnb’s CEO, Brian Chesky, among other senior executives. Nathan Blecharczyk, the company’s chief strategy officer, reportedly told Joyce: “We’re not here to promote American values.”
https://bariweiss.substack.com/p/stakeholder-capitalism-is-a-trojan

China set to join ‘graveyard of empires’ in Afghanistan
“China has reaped the benefits of costly American military and security efforts in Afghanistan but now faces a hostile Islamic regime near its western border, according to David Stilwell, former assistant secretary of state for East Asia and Pacific affairs, who adds that the Biden administration should not help Beijing deal with its problems there.”
https://www.washingtontimes.com/news/2021/aug/18/china-set-join-graveyard-empires-afghanistan/

China Weighing Occupation of Former U.S. Air Base at Bagram: Sources
“The Chinese military is currently conducting a feasibility study about the effect of sending workers, soldiers and other staff related to its foreign economic investment program known as the Belt and Road Initiative in the coming years to Bagram, according to a source briefed on the study by Chinese military officials, who spoke to U.S. News on the condition of anonymity.”
https://www.usnews.com/news/world-report/articles/2021-09-07/china-weighing-occupation-of-former-us-air-base-at-bagram-sources