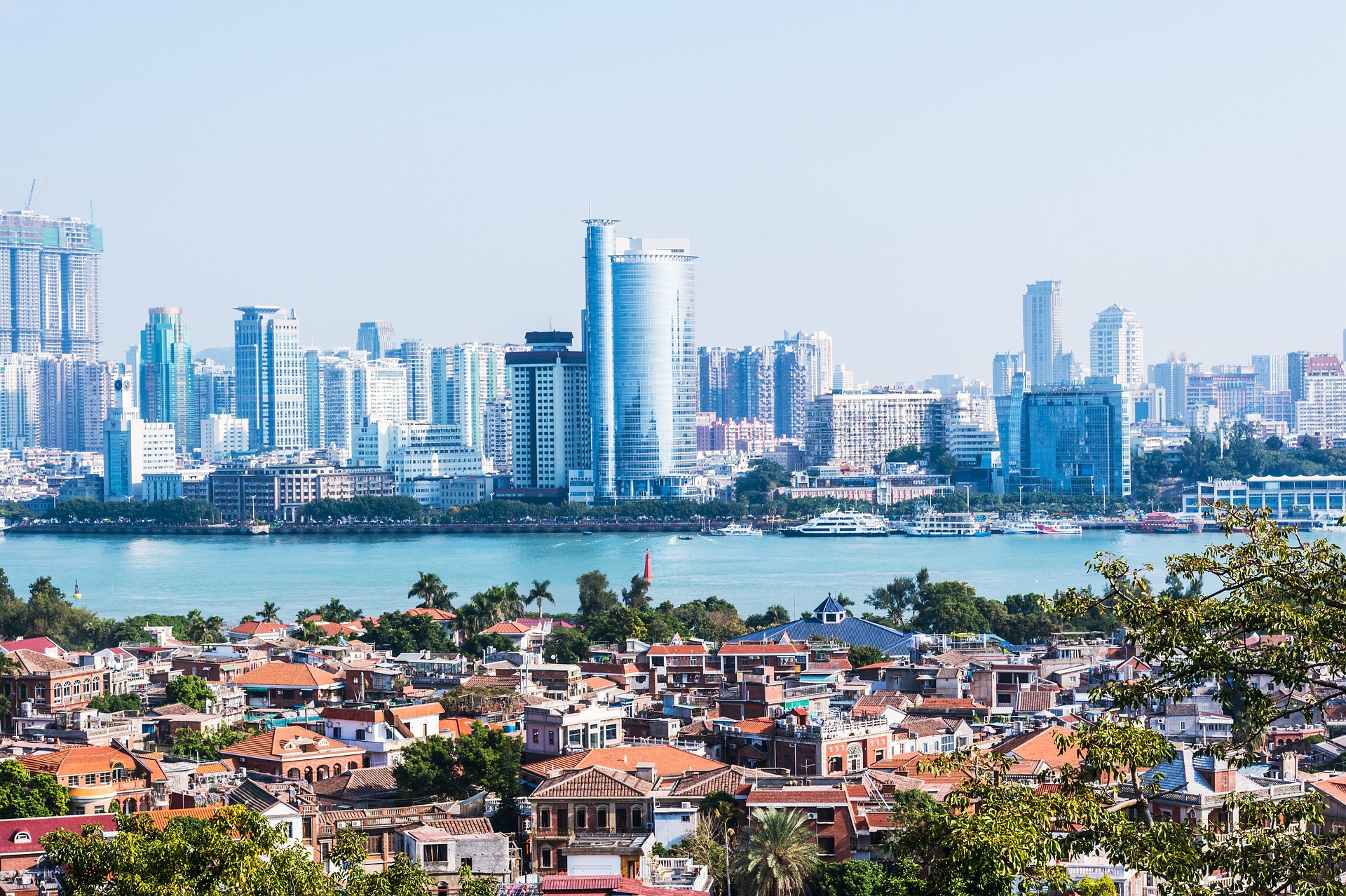 Vivian Wang, survivor of the Cultural Revolution, became an American Entrepreneurial success story at Caldwell Banker. She joins us to discuss the state of the Chinese real estate industry.

China Coal Production Hits Record To Avoid Energy Crisis
Many of us in the Western world are spending the most ever on electricity bills, forced to eat fake meat, and paying a lot more in taxes for green initiatives. At the same time, China ignores the green revolution by ramping up record coal production in December.  China, the world’s biggest polluter and consumer of coal, produced a record 384.67-million tons of the dirtiest fossil fuel last month, up 7.2% YoY compared with the same month a year ago. The month prior, production was up nearly 14 million tons. For the full year, output reached 4.07 billion tons, up 4.7% over the previous year.
https://www.zerohedge.com/commodities/china-coal-production-hits-record-avoid-energy-crisis

China Records Lowest Birth Rate in Modern History in 2021
Data released by China’s National Bureau of Statistics on Monday showed births running only slightly ahead of deaths in 2021, providing further evidence that the Chinese population has stalled out at 1.413 billion and might already be declining – a fearsome prospect for an economic system designed on the assumption of stable or steadily-increasing population.
https://www.breitbart.com/national-security/2022/01/17/china-records-lowest-birth-rate-in-modern-history-in-2021/

Xi Jinping warns Fed against hiking interest rates
Chinese President Xi Jinping took to the virtual Davos stage to address Fed Chairman Jerome Powell with this message: Please don’t lift interest rates. “If major economies slam on the brakes or take a U-turn in their monetary policies, there would be serious negative spillovers. They would present challenges to global economic and financial stability, and developing countries would bear the brunt of it,” said Xi, according to a transcript of his remarks on Monday.
https://www.marketwatch.com/story/xi-jinping-warns-fed-against-hiking-interest-rates-11642502735?siteid=yhoof2

WEF’s Schwab Gives China’s Xi Propaganda Platform Against “Hegemonic Bullying… Cold War Mentality”
After urging his fellow elites to “narrow the gap between rich and poor,” Schwab introduced Chinese President Xi Jinping who wasted not time in warning against the “fanning of ideological antagonism and the politicizing of economic, scientific and technological issues.” Diplomatically careful not to accuse any individual country – but blatantly obvious to anyone not completely red-pilled by Schwab’s heroic introduction of the Chinese leader – Xi warned nations against protectionism, well as “hegemony and bullying,” urging countries to work cooperatively on global challenges.
https://www.zerohedge.com/markets/wefs-schwab-gives-chinas-xi-propaganda-platform-against-hegemonic-bullying-cold-war

Winter Olympics: Behind the bubble in Beijing
China is continuing a zero-Covid strategy, as international teams prepare to head to China from corners of the world swamped by Omicron. The Chinese authorities hope to manage this by keeping the media, athletes and observers in huge separate isolation bubbles which incorporate not only housing and event locations but also transport links.
https://www.bbc.com/news/av/world-asia-china-59869509

Treasurer Moore Announces Board of Treasury Investments Ends Use of BlackRock Investment Fund
The decision was based on recent reports that BlackRock has urged companies to embrace “net zero” investment strategies that would harm the coal, oil and natural gas industries, while increasing investments in Chinese companies that subvert national interests and damage West Virginia’s manufacturing base and job market.
https://www.wvtreasury.com/About-The-Office/Press-Releases/ID/406/Treasurer-Moore-Announces-Board-of-Treasury-Investments-Ends-Use-of-BlackRock-Investment-Fund

American Diplomats In Geneva, Paris Fall Victim To “Havana Syndrome”
Havana Syndrome, which has alternatively been blamed on crickets, and Russia, is a mysterious phenomenon that has afflicted personnel – both spies and legitimate diplomats, according to media reports – at embassies around the world, including Cuba, China, Vietnam, Western Europe, South America and elsewhere. Symptoms include dizziness, cognitive difficulties, tinnitus, vertigo and trouble seeing, hearing and with balance. Elsewhere in Europe, cases have been reported in Serbia, Germany and Austria.The attacks have inflicted “profound” physiological and psychological harm to the victims, who have described hearing loss, debilitating headaches, and even some lasting brain damage, for those who have been targeted in these attacks.
https://www.zerohedge.com/geopolitical/american-diplomats-geneva-paris-fall-victim-havana-syndrome

China’s Property Sector Is Crashing Again And This Time It Has Reached The Country’s Biggest Developer
The crisis engulfing China’s property sector – which has prompted Beijing to capitulate on its tightening ambitions yet again, and forced China to launch an increasingly more aggressive easing campaign, which so far culminated in the first rate cut in Chinese official rates in almost two years – has impacted the country’s biggest developer, sending the shares and bonds of Country Garden Holdings – which is even bigger than Evergrande – plunging amid fears that a reportedly failed fundraising effort may be a harbinger of waning confidence.
https://www.zerohedge.com/markets/chinas-property-sector-crashing-again-and-time-it-has-reached-countrys-biggest-developer

Is China ready to spring military surprises?
Kurt Campbell, the US National Security Council Coordinator for the Indo-Pacific, warned last week of a “strategic surprise” in the region. He told the Center for Strategic and International Studies in Washington DC: “If you look and if you ask me, where are the places where we are most likely to see certain kinds of strategic surprise – basing or certain kinds of agreements or arrangements – it may well be in the Pacific.”
https://economictimes.indiatimes.com/news/defence/is-china-ready-to-spring-military-surprises/articleshow/88945687.cms

“Social Capital” Founder Chamath Palihapitiya: “Nobody Cares About What’s Happening To The Uyghurs”
Chamath Palihapitiya, the founder of “Social Capital” and part-owner of the Golden State Warriors basketball team, told the “All-In” podcast that “nobody cares” about the ethnic cleansing of Uyghur Muslims in East Turkestan by the Chinese Communist Party. “If you’re asking me if I care about a segment of a class of people in another country, not until we can take care of ourselves will I prioritize them over us,” he said.
https://www.realclearpolitics.com/video/2022/01/17/owner_of_the_golden_state_warriors_chamath_palihapitiya_nobody_cares_about_whats_happening_to_the_uyghurs.html

Too big to fail: China eyes Afghanistan investment amid fears of state collapse
Beijing has so far refused to recognize the Taliban government, known as the Islamic Emirate of Afghanistan, though semisecret negotiations continue via its embassy in Kabul. In August, following the Taliban takeover, the Chinese Foreign Ministry said it was “willing to continue to develop … friendly and cooperative relations with Afghanistan.” In September, China pledged a modest $31 million in food, medicine, COVID-19 vaccines and other aid. About half has been disbursed, according to the ministry of refugees in Kabul. Pakistan has pledged $28 million.
https://asia.nikkei.com/Spotlight/The-Big-Story/Too-big-to-fail-China-eyes-Afghanistan-investment-amid-fears-of-state-collapse

Underwater drones herald sea change in Pacific warfare
The drones that have changed the complexion of war from the sky are being replicated at sea, as great powers develop and deploy unmanned underwater vessels (UUVs) to gain a strategic edge in the Pacific and beyond. The United States, United Kingdom, China and Russia are all developing and deploying the vessels, indicating the “dronification” of future maritime warfare.
https://asiatimes.com/2022/01/underwater-drones-herald-sea-change-in-pacific-warfare/