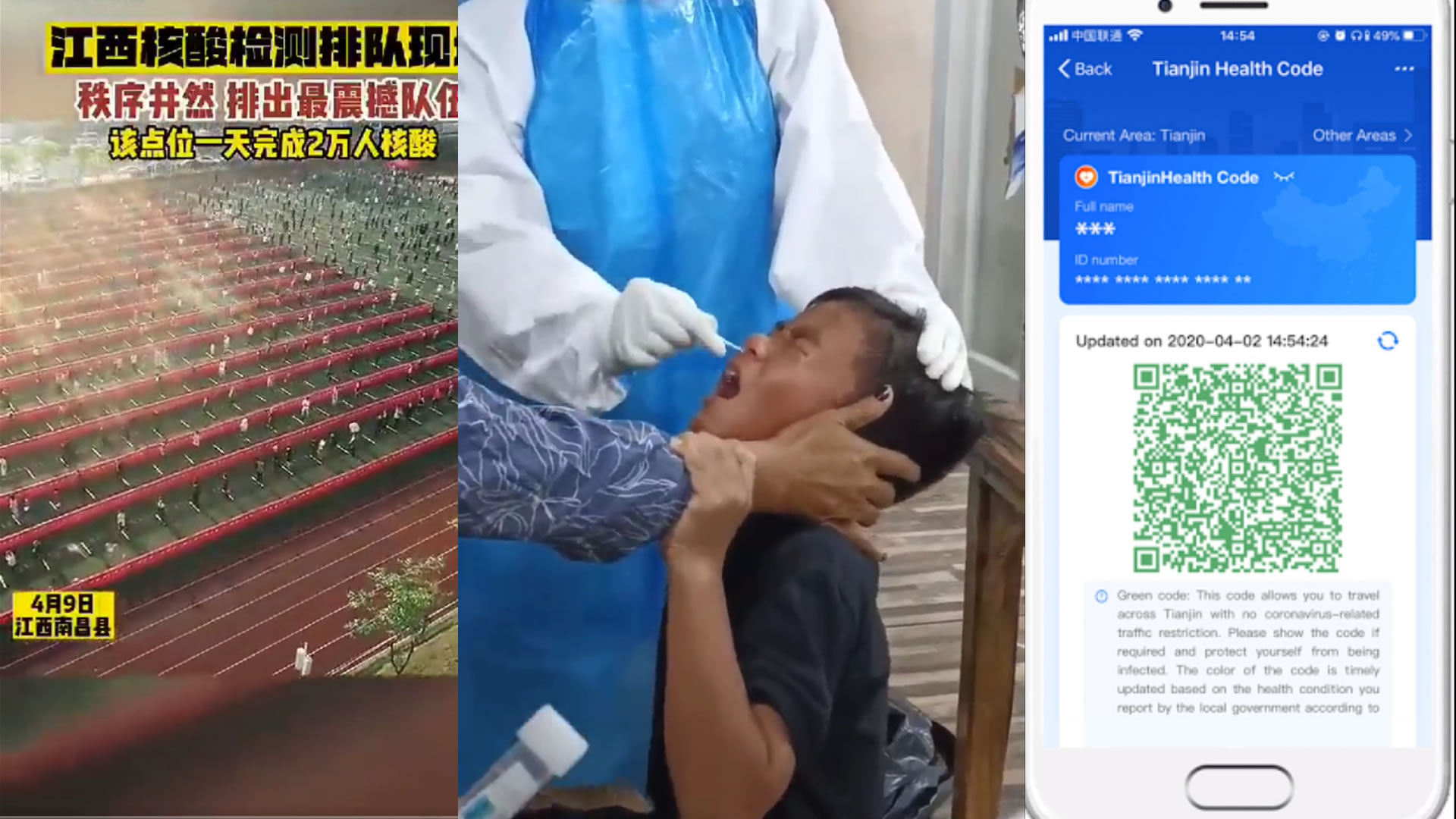 China Blocks Highways To Curb COVID-19, 30 Million Truckers Stranded
Over 10 of China’s 34 provinces and regions blocked most entrances of their highways on April 11, and an estimated 30 million truckers are stuck on highways or in unfamiliar cities.
https://www.theepochtimes.com/china-blocks-highways-to-curb-covid-19-30-million-truckers-stranded_4398010.html

Food Shortages Loom in China as Farmers Face Lockdown Woes
Jilin Province in China has announced that efforts will continue to ensure that spring plowing continues despite a province-wide COVID-19 lockdown, even as online videos show police throughout China interrupting farmers at work in their fields.
https://www.theepochtimes.com/food-shortages-loom-as-chinese-farmers-face-trouble-amid-pandemic_4394693.html

Drone Announcement
A drone with a loudspeaker flies over Shanghai announcing “Please comply w covid restrictions. Control your soul’s desire for freedom. Do not open the window or sing.”
https://twitter.com/theragex/status/1512905128621269005

The WHO is building a global vaccine passport
The World Health Organization (WHO) has contracted German-based Deutsche Telekom subsidiary T-Systems to develop a global vaccine passport system, with plans to link every person on the planet to a QR code digital ID. Indeed, despite the minuscule threat posed by new variants and dubious-at-best vaccine efficacy, the WHO is adamant that a global QR code-based vaccine passport system is vital for all future health emergencies, not just COVID.
https://thecountersignal.com/who-is-building-a-global-vaccine-passport/

Checking Covid 19 certificates: World Health Organization selects T-Systems as industry partner
The World Health Organization (WHO) will make it easier for its member states to introduce digital vaccination certificates in the future. The WHO is setting up a gateway for this purpose. It enables QR codes on electronic vaccination certificates to be checked across national borders. It is intended to serve as a standard procedure for other vaccinations such as polio or yellow fever after COVID-19. The WHO has selected T-Systems as an industry partner to develop the vaccination validation services.
https://www.telekom.com/en/media/media-information/archive/covid-19-who-commissions-t-systems-648634

China’s Xi Jinping is pushing for a global Covid QR code. He may struggle to convince the world
Speaking at the virtual G20 leaders’ meeting on Saturday, Xi said that to ensure the “smooth functioning” of the world economy during the pandemic, countries needed to coordinate a uniform set of policies and standards, according to state-run news agency Xinhua.
“China has proposed a global mechanism on the mutual recognition of health certificates based on nucleic acid test results in the form of internationally accepted QR codes. We hope more countries will join this mechanism,” Xi said.
https://www.cnn.com/2020/11/23/asia/china-xi-qr-code-coronavirus-intl-hnk/index.html

The WHO is building a global vaccine passport
https://thecountersignal.com/who-is-building-a-global-vaccine-passport/

China’s Xi Jinping is pushing for a global Covid QR code. He may struggle to convince the world
https://www.cnn.com/2020/11/23/asia/china-xi-qr-code-coronavirus-intl-hnk/index.html

Tucker: Our leaders are defending what China is doing
Fox News host gives his take on COVID restrictions on ‘Tucker Carlson Tonight.
https://rumble.com/v10njwp-tucker-our-leaders-are-defending-what-china-is-doing.html

Global Times Commentator: US would not defend Taiwan
US warned China to learn some lessons from Russia. It inadvertently showed that US would have given up the thought of sending troops to Taiwan and can do nothing more than using sanctions: Global Times Commentator Hu Xijin
https://twitter.com/CGMeifangZhang/status/1512084818443481091

These are the 12 most powerful people in China you’ve probably never heard of
You may not have heard the name Li Keqiang before — but you likely soon will. That’s because when the Chinese premier steps down from power in March 2023, a decision he confirmed in March, it will trigger a significant reshuffle in the upper echelons of the Chinese government. In a country where the succession of power has happened both slowly and deliberately, Li’s retirement could kick off a fundamental shift in roles among China’s most powerful government body  — the Politburo Standing Committee — and lead to further consolidation of power under Chinese leader Xi Jinping.
https://www.businessinsider.com/12-most-powerful-people-in-china-youve-never-heard-of-2022-3

China ‘Decodes’ An Orbiting US Satellite; Claims Expertise In Automatically Detecting & Fixing Security Flaws In Outer Space
However, the view in the United States is quite contrary to Chinese assertions. The United States Space Force’s Gen. David Thompson had earlier told The Washington Post that Russia and China were undertaking daily attacks against American satellites, employing digital attacks, lasers, and radio frequency jamming. Attacks have been occurring for some years and have recently increased, according to The Hill. Hackers hacked computers that control satellites in the United States in 2018 whereas, in 2019, Iranian hackers attempted to dupe satellite firms into installing malware.
https://eurasiantimes.com/china-decodes-an-orbiting-us-satellite-claims-expertise-in-automatically-detecting-fixing-security-flaws-in-outer-space/

A US Indo-Pacific framework that tries to build out China is unrealistic
When he withdrew the United States from the Trans-Pacific Partnership, former president Donald Trump tore up the playbook for American economic engagement with Asia. In February 2022, his successor, Joe Biden, offered his own strategy for the region — one that blends broadly defined security and commercial interests while sharing Trump’s refusal to engage in new comprehensive trade agreements.
https://www.eastasiaforum.org/2022/04/10/a-us-indo-pacific-framework-that-tries-to-build-out-china-is-unrealistic/