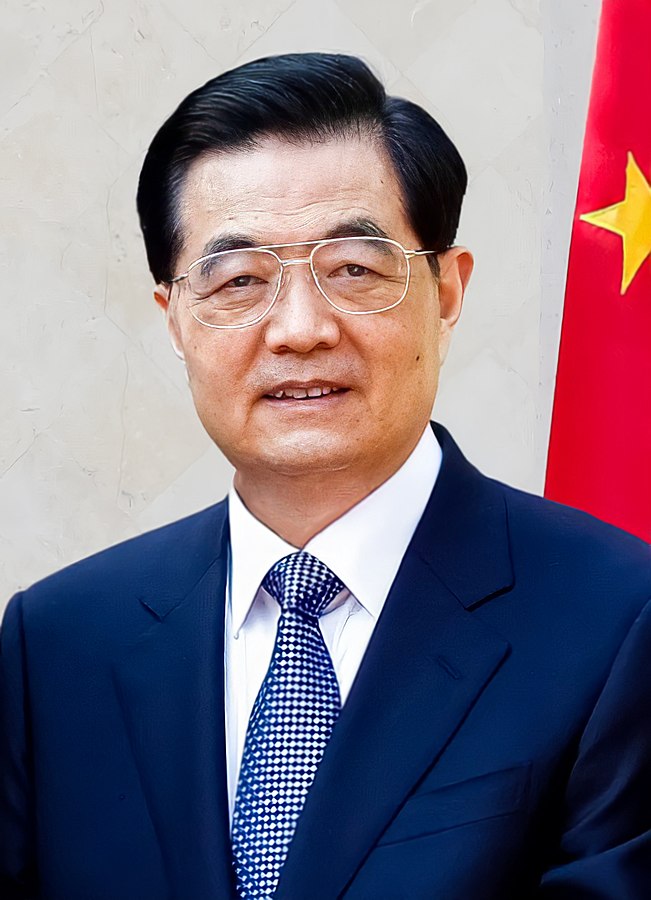 Today’s Guest: Frank He, L. Ac., QME, DAOM
Frank He, LAc, founder of HeCares Integrative Medicine Center, trained in China at Liaoning University of TCM, and later practiced at its affiliated hospital as well as Shenyang Neurology Hospital. Prior to his eight years of formal medical school study, he was taught by his grandfather, an experienced practitioner of TCM.
http://www.hecares.net/team.html

Video before Hu Jintao’s exit from congress puts files in focus
A new video of Hu Jintao preceding his unexpected removal from the closing ceremony of the ruling Communist Party’s congress Saturday has fueled speculation that the former Chinese president may have taken issue with certain documents.
https://asia.nikkei.com/Politics/China-s-party-congress/Video-before-Hu-Jintao-s-exit-from-congress-puts-files-in-focus

Fighting a Chip War on the Cheap
This isn’t a drill. After the Trump administration banned high-end chip sales to China’s Huawei in 2020 and shut down its 5G smartphone business, Harvard guru Graham Allison asked, “Could the US attempt to enforce that ban become a 21st-century equivalent of the oil embargo the United States imposed on Japan in August 1941?” The latest Biden measures extend the Huawei ban and more to the whole of Chinese industry. I don’t think China will respond by seizing Taiwan’s state-of-the-art chip fabrication plants, which make 70 percent of the world’s advanced semiconductors. Instead, China will dig in for an economic war of attrition that it may well win.
https://compactmag.com/article/fighting-a-chip-war-on-the-cheap

With Moscow Distracted, Xi Jinping Could Turn China’s Gaze To Russia
The threat is overstated. Even though Party delegates baked new anti-Taiwanese language into the Communist Party’s constitution, the real territorial temptation for China might be to the North, in the Russian Far East, where hundreds of thousands of ethnically Chinese Russian citizens, trapped in a substantially weakened and hollow dictatorship, could potentially be enticed to reconsider their options.
https://www.forbes.com/sites/craighooper/2022/10/24/as-russia-gets-weaker-xi-jinping-may-forgo-taiwan-to-grab-eastern-russia/

Pfizer Partnered With China’s Vaccine Passport Platform, Admits Being ‘Proud To Stand With China Leaders.’
Pfizer Inc partnered with a Chinese Communist Party payment platform which has been used to implement “vaccine passports” in China since the outbreak of COVID-19. The company said it was “proud to stand with China leaders.” The pharmaceutical giant – whose U.S. lobbying efforts hit an all-time high in the past year – expressed its pride for the brutal, communist regime.
https://thenationalpulse.com/2021/12/29/pfizer-partnered-with-alipay-praised-ccp/

“He all but owns this new standing committee”—Xi’s power consolidation
XI JINPING won a third term as general secretary of the Chinese Communist Party. Our correspondent explains how the recent party congress solidified Xi’s grip on power.
https://www.economist.com/podcasts/2022/10/24/he-all-but-owns-this-new-standing-committee-xis-power-consolidation

Wealthy Chinese Activate Financial “Escape Plans” Terrified Of Xi’s Coming Reign Of Terror, And Why This Is Good News For Bitcoin
Recall that just hours after Xi not only was declared dictator for life but unceremoniously and in full view of the entire world had his centrist, globalist and pro-reform predecessor Hu Zintao escorted out of the building, guaranteeing that the rest of his rule will be a radical departure from heretofore accepted norms, and calling for the “great rejuvenation of the Chinese nation” based on revitalizing the CCP’s role as the economic, social, and cultural leader, Chinese stocks cratered to multi-decade lows and the yuan plunged to a record low as the growing realization of the horror that is coming swept across the land.
https://www.zerohedge.com/geopolitical/wealthy-chinese-execute-fire-escape-plans-after-xi-secures-third-term

Former Chinese leader Hu Jintao unexpectedly led out of room as Party Congress comes to a close
China’s former top leader, Hu Jintao, was unexpectedly led out of Saturday’s closing ceremony of the Communist Party Congress, in a moment of drama during what is typically a highly choreographed event.
https://www.cnn.com/2022/10/22/china/china-party-congress-close-hu-jintao-intl-hnk/index.html
https://twitter.com/lazydjay/status/1583713683997220866

EXCLUSIVE: Methods that the Chinese Communist Party Uses to Colonize the United States
Unlike the massive invasion of the United States by illegal aliens across our southern border, a deliberate policy perpetrated by the Biden regime, China has conducted what one could describe as a slow-motion invasion over decades, which began with the “Opening” of China under the Nixon Administration and accelerated thereafter.
https://www.thegatewaypundit.com/2022/10/exclusive-methods-chinese-communist-party-uses-colonize-united-states/

Prosecutor says U.S. voting leak to Chinese workers ‘probably largest data breach in U.S. history’
major scandal involving the storage of sensitive voting data with Chinese-based third-party contractors is potentially the biggest such leak in the history of the United States, a prosecutor has alleged in court.
https://justthenews.com/government/security/prosecutor-says-us-voting-leak-chinese-workers-probably-largest-data-breach-us

Markets Are Finally Grasping That China Is A Marxist State
Yet what happened yesterday is not going to “Truss up” China’s leadership and force a change of policy direction. Read Politburo member Wang Huning: his core belief is that markets exist only to serve a greater state goal, rather than getting to choose the head of state to serve their goals. Anyone who does not get that should not be talking Chinese markets.
https://www.zerohedge.com/markets/markets-are-finally-grasping-china-marxist-state

Globalization Isn’t Dead The World Is More Fragmented, but Interdependence Still Rules
After two and a half years of a pandemic that has exposed the fragility of global supply chains and eight months of war in Ukraine that has severed economic ties between Russia and the West and disrupted global food and energy markets, the world seems to be at a turning point. Globalization, many claim, is receding. A growing number of analysts now argue that much as World War I and the 1918 influenza pandemic brought an end to the first great era of globalization, the combination of Russia’s war in Ukraine, COVID-19, simmering populism, and geopolitical competition between the United States and China has kicked the second great era of globalization into reverse. “This new cold war marks the end of the era of globalization and integration that has shaped the international system since 1989,” the journalist Fareed Zakaria wrote in mid-October.
https://www.foreignaffairs.com/world/globalization-isnt-dead

China’s Xi Jinping Is Bullishly Mugged by Reality
Markets are a look into the future, and over the weekend it became official that Xi and those in his inner circle had consolidated power. Getting more specific, a report from the Wall Street Journal explained that Xi et al “have broken with the pro-market pragmatism of past decades to champion a more egalitarian society, greater state control over the economy and an increasingly muscular foreign policy.”
https://www.realclearmarkets.com/articles/2022/10/25/chinas_xi_jinping_is_bullishly_mugged_by_reality_860935.html

Taiwan Prepares For Chinese Invasion By Stocking Up On Natural Gas And Coal
“When it does happen, we need to be able to undertake pressure to a certain degree,” Tseng Wen-Sheng, a deputy economy minister, told Reuters. Taiwan depends on imports for some 98 percent of its energy consumption, with coal and natural gas accounting for 81.5 percent of electricity generation on the island. Nuclear provides another 9.6 percent and wind and solar contribute another 6 percent.
https://oilprice.com/Latest-Energy-News/World-News/Taiwan-Prepares-For-Chinese-Invasion-By-Stocking-Up-On-Natural-Gas-And-Coal.html

Unlocked: Who Started the China War? Nasty Old Xi? Or Mean Old America?
If you really want to know the original sin of US-China relations, it was the so-called US accidental bombing of the PRC embassy in Belgrade in 1999. A lot of people not just me, including the pre-Katharine Viner Guardian, and the CCP leadership think it was intentional. The bombing convinced the PRC leadership of the violence and hypocrisy of the United States when it stood in a position of impunity, and gave impetus to the CCP drive for PRC national power, strategic autonomy, and, well, impunity to resist US violence and coercion.
https://www.patreon.com/posts/unlocked-who-war-59931922

Decoding Emperor Xi’s Third Term | Xi’s Return Amidst Economic Crisis | NewsX
The most crucial event on the Chinese Communist Party’s (CCP) political calendar is transpiring. Over 2,300 delegates have assembled at the Beijing’s Great Hall from all over China, for the appointment of the CCP’s top leadership, the amendments of its constitution, and the approval of the nation’s policy directions for the next five years.
https://www.youtube.com/watch?app=desktop&v=-p_H7GQQig8