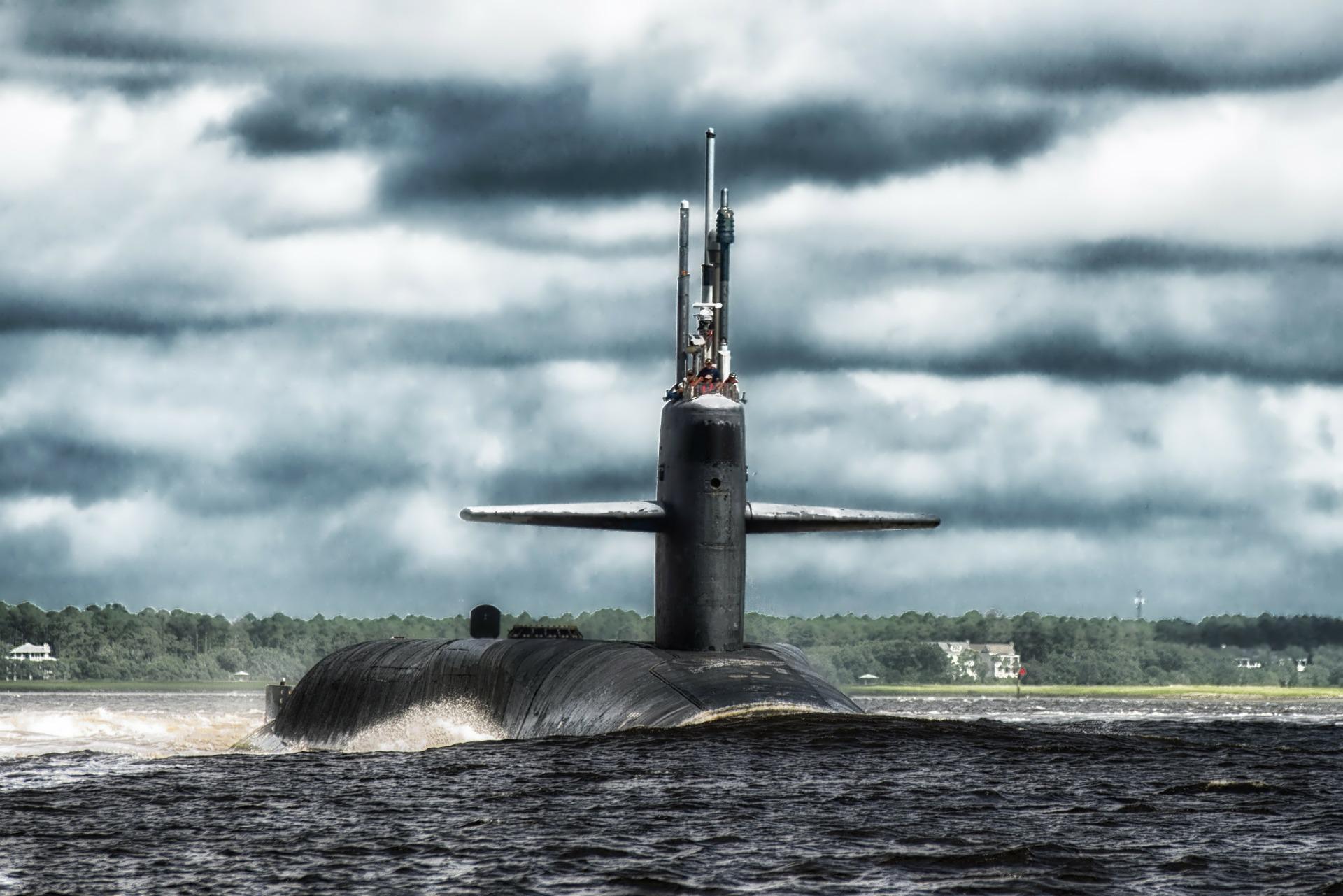 Beijing’s Claim to Sovereignty of Taiwan Strait Undermines US ‘One China’ Policy
The Chinese regime recently claimed sovereign rights on the entire Taiwan Strait,
adding that U.S. warships sailing through it were partaking in provocative behavior.
Beijing’s new move might have put the U.S. government in a more di!cult position
to continue its “One China” policy.
https://www.theepochtimes.com/beijings-claim-to-sovereignty-of-taiwan-strait-undermines-us-one-china-policy_4549578.html

The White House’s Secret Meetings With BlackRock Are a Major Threat to Freedom
There is emerging evidence, however, that BlackRock’s influence is not limited to the corporate and financial spheres. After years of building political alliances and making a laundry list of strategic hires, BlackRock has managed to amass huge amounts of political clout within the Biden administration and U.S. Federal Reserve, allowing them to develop unprecedented strategic partnerships and, according to our new research, gain access to officials in the White House.
https://redstate.com/heartlandinstitute/2022/06/28/the-white-houses-secret-meetings-with-blackrock-are-a-major-threat-to-freedom-n585532

G7 Unveils $600 Billion Global Infrastructure Plan To Counter China’s ‘Belt And Road’
G-7 leaders from the US, Canada, Germany, Italy, Japan, and the European Union gathered at a summit in Bavaria, Germany, on Sunday and unveiled the Partnership for Global Infrastructure and Investment (PGII) that will “will deliver game-changing projects to close the infrastructure gap in developing countries, strengthen the global economy and supply chains, and advance U.S. national security,” a White House press release read.
https://www.zerohedge.com/geopolitical/g7-unveils-600-billion-global-infrastructure-plan-counter-chinas-belt-and-road

Never mind China’s new aircraft carrier, these are the ships the US should worry about
Then there is the simple fact that, impressive as they seem, aircraft carriers aren’t necessarily best suited to what experts see as the most plausible conflict scenarios in the near future — including clashes in the East and South China Seas and an invasion of Taiwan. Essentially, experts say, the Fujian might be China’s biggest ship, but it’s probably not the biggest problem on the minds of US naval commanders right now. Here are four types of ship at China’s disposal that arguably pose a far greater threat to US naval dominance.
https://www.cnn.com/2022/06/25/asia/china-navy-aircraft-carrier-analysis-intl-hnk-ml-dst/index.html

Religious Freedom Summit To Call Out China
Key voices in Washington this week plan to spur more international condemnation of China’s persecution of religious minorities during the International Religious Freedom Summit, a three-day event beginning June 28, bringing together a broad, bipartisan international coalition of leaders, groups, and businesses that fight for faith-based freedom around the world. Organizers say the summit will be the largest gathering of religious freedom advocates in the world this year and will precede a government-sponsored ministerial on religious freedom in London on July 5-6.
https://www.realclearpolitics.com/articles/2022/06/27/religious_freedom_summit_to_call_out_china_147803.html

Did Hunter Biden influence Obama-era China policy?
During the eight years of the Obama presidency in which Vice President Biden was entrusted with this portfolio, China stole the personal information of the nearly 20 million Americans who sought a security clearance, militarized the South China Sea under our nose, harassed and removed countless foreign journalists from their soil, began a genocide in Xinjiang and stole trillions of dollars of American intellectual property. The Obama-Biden administration responded with no sanctions, no trade embargoes or tariffs, no real scrutiny of their business acquisitions, no pushback against their high-tech espionage and no restrictions against their foreign propagandists. Rather, it appears then-Vice President Biden leveraged his time as head of the China file to allow his son, Hunter, to build strong business ties in China.
https://spectatorworld.com/topic/hunter-biden-chris-heinz-obama-era-china-policy/

The day before the Shanghai explosion, a grand ceremony to launch an aircraft carrier was held here
At around 4:00 in the morning on June 18th, some Shanghai residents heard multiple loud bangs in their sleep, followed by the sight of blazing flames in the sky. The incredible scene made some of them even think that war had suddenly broken out between China and the US.
The most confusing one is: that three fires broke out at the same time in the petrochemical plant area, and they were distant from each other. Why did three places that are so far apart explode and catch fire at the same time?
https://www.youtube.com/watch?v=9gdtV_9nFRQ

Biden Will Use European Tour To Step Up Western Pressure on China
Biden is currently in the German Alps on the first leg of his trip. On Sunday, he met with German Chancellor Olaf Scholz to kick off the G7 summit. During the meeting, Biden announced a $600 billion global infrastructure initiative to combat Chine’s Belt and Road Initiative (BRI). Washington claims Beijing’s BRI invests money in developing countries but uses the debt to coerce governments into adopting pro-China policies. A senior US official speaking with reporters said Western nations believe early participants in BRI are experiencing buyer’s remorse, and the G7’s initiative would have an edge. “There’s no doubt that BRI has been around for several years and it’s made a lot of cash disbursements and investments,” the official said. “But I would argue that it is definitely not too late. And I’m not even sure that it is late.”
https://news.antiwar.com/2022/06/26/biden-will-use-european-tour-to-step-up-western-pressure-on-china/

CCP Inc. in West Africa – How Chinese Party-State Actors Secured Critical Minerals in Guinea
The second section explores how commercial ventures in bauxite fit into the broader picture of deepening Chinese-Guinean relations. Since the mid-2010s, Beijing and Conakry have exchanged multiple state visits, and China issued a $20 billion loan to Guinea, which later joined the Belt and Road Initiative (BRI) in 2018. Government-loan disclosures, diplomatic documents, and corporate press releases show that Chinese stateowned companies benefited directly from state financing, and many Chinese companies involved in the bauxite sector in turn sought to emphasize their own role in carrying out Chinese policy initiatives.
https://csis-website-prod.s3.amazonaws.com/s3fs-public/publication/220607_Boland_CCP_Guinea.pdf

Statement by Australia, Japan, New Zealand, the United Kingdom, and the United States on the Establishment of the Partners in the Blue Pacific (PBP)
This new initiative builds on our longstanding commitment to the region. Australia and New Zealand are of the region and members of the Pacific Islands Forum; Japan, the United Kingdom, and the United States are founding Dialogue Partners. Our countries maintain close people-to-people ties to and are longstanding development partners with the Pacific Islands, reflected in our combined $2.1 billion in development assistance for the region. We are united in our shared determination to support a region that benefits the peoples of the Pacific. We are also united in how we realize this vision—according to principles of Pacific regionalism, sovereignty, transparency, accountability, and most of all, led and guided by the Pacific Islands.
https://www.whitehouse.gov/briefing-room/statements-releases/2022/06/24/statement-by-australia-japan-new-zealand-the-united-kingdom-and-the-united-states-on-the-establishment-of-the-partners-in-the-blue-pacific-pbp/

Foreign chief Locsin says no more joint exploration of oil with China
“Three years on and we had not achieved our objective of developing oil and gas resources so critical for the Philippines – but not at the price of sovereignty; not even a particle of it,” Locsin said. Locsin said that for three years, as the country’s top diplomat, he tried to come to an agreement that would facilitate a joint exploration of, and exploitation of, oil and gas in the West Philippine Sea. “We got as far as it is constitutionally possible to go. One step forward from where we stood on the edge of the abyss is a drop into constitutional crisis,” Locsin added.
https://www.msn.com/en-us/news/world/foreign-chief-locsin-says-no-more-joint-exploration-of-oil-with-china/ar-AAYOYP1

Made in China? More than half the products in military exchanges could be banned
At least half of the products sold in exchanges, if not more, are made in China, noted Rep. Salud Carbajal, D-Calif. While the idea of banning these products “sounds good and is patriotic,” he said, “it would have an adverse effect on our military families.” It would mean they would have to go out to stores in the civilian community to find the products they rely on that would no longer be sold in exchanges, he said.
https://www.militarytimes.com/pay-benefits/mil-money/2022/06/24/made-in-china-more-than-half-the-products-in-military-exchanges-could-be-banned/